Don't hold your breath, but I may soon be back to blogging!

It's been far too long, but soon I should have more free time and be able to bring you all up to date with what's been going on since January 2012! Suffice to say that 2012 was a good year in general, but I made a life-changing decision in December and have now sold Dairy House Antiques. Many of you will already know this, but some of you 'far flung followers' may not. Two of the DH dealers, Trixie Hewlett of The Vintage Bothy blog and Debbie Jeffery are the new owners and took over the reins on 1 March 2013.

Paul has been in hospital several times since December 2012 and has, today, been discharged after a 6½-week stint in Yeovil Hospital. All is well but it's been a bit of a rollercoaster since his first stay just before Christmas. Onward and upward now, hopefully.

Now I no longer have the responsibilities of the day-to-day running of Dairy House (although I do still have a unit there) I have rejoined the Fairs circuit. I am signed up for a year of Shepton Mallet Antiques Fairs at the Bath & West Showground, some of the Vintage Bazaar events and similarly the Vintage & Handmade Fairs. I have also taken a unit at the Antiques Bazaar in Crewkerne. It's so long since I blogged that I've forgotten how to set up links, but no doubt I'll sort that out in due course.

I shall be spending more time at home, although that doesn't seem to have happened yet, taming our wayward garden that has had very little attention in the 5 years that I was involved with Dairy House, and hopefully spending more time with Hannah and Florence. It was Florence's birthday last week. Where the last 3 years have gone I have no idea but gone they have, and she has now started pre-school.

I hope to be back again soon with photos and more news but in the meantime if any of you are still following this almost defunct blog I thank you and trust you are all fighting fit and enjoying life!

Sue x
Posted by Vintage to Victorian at 11:33 pm No comments: Links to this post 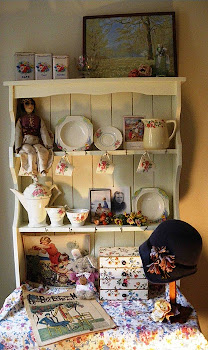 This is a Flickr badge showing items in a set called Dairy House. Make your own badge here.

My Book of Sky Photos

Sky on my Door...
Wiltshire and West ...
By Sue Meager

Vintage to Victorian
We left Northampton in 1988 to move to Bath, where we stayed for 10 years. From there to Wiltshire and now in Somerset with a business in Dorset! The house and garden still need work but as you know, there are never enough hours in the day! "We" is hubby and me - one retired and the other running around like a thing possessed buying and selling antique and vintage items and in April 2008 I became the proprietor of an antiques shop/centre.In February 2013 I 'semi-retired', selling Dairy House Antiques and returning to the fairs circuit and making plans to enjoy our granddaughter and tame our wayward garden!